I started work on Mr. Pemberton’s house a couple weeks later.  An annoying realtor by the name of Diane Spencer was also there.  She showed up in her obligatory Range Rover with her company’s name “Spencer Associates” stenciled on the side.  And of course, out of sheer necessity, she took up two spots in the driveway, forcing me to park farther from the front door and lug my tools a greater distance. 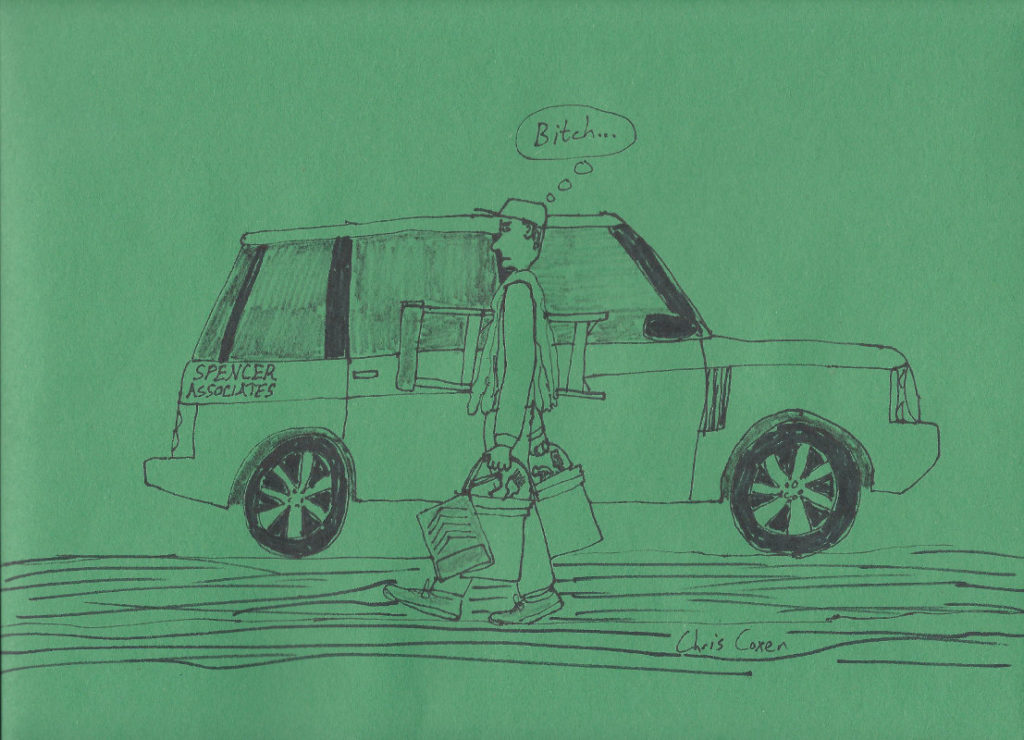 I had never met Diane Spencer but I had heard about her and seen her face plastered over real estate signs in the nicer parts of Boston.  I heard she was an aggressive, kind-of-hot-for-her-age, back-stabbing bitch that was the most successful realtor in town.  I was disappointed Mr. Pemberton hired this dragon but unfortunately, it was probably going to take someone like this to sell such a large, oddball property for the amount it was worth in the part of town it resided.

She was talking to Mr. Pemberton in the next room when I entered.  She was wearing a very high quality, stylish, khaki-colored suit with dark brown high heels that brought her to the make-believe height of 5’9”.  The light-colored suit help highlight a deep tan that actually looked real and probably recently originated in Miami or some Caribbean island.  Her well-placed bangs hid unwanted wrinkles and made her appear a tad more girlish without compromising her mature, commanding presence.  Her hair was a product of such constant Newbury Street salon attention, it was hard to tell if it was her actual hair or a really nice wig.  Her Maker gave her an attractive slim figure that she chose to look after.  She smelled nice.

Diane walked over to me as if she was the Queen of “The Castle”.  She felt it was her duty and her right to tell me not just what to work on but how and in what order.

“I think you should start with the trim first and I know how you painters love to use semi-gloss on the trim but I think satin finish would be more appropriate.  After that, I would deal with the ceilings.  Please don’t use regular ceiling white.  It’s too bright.  I think a linen white would be best.”

I put my five-gallon bucket of tools down.

“Hi, I’m Chris.  The trim will be done after I take care of removing the wallpaper.  Or maybe I’ll do the ceilings after I strip the wallpaper.  I don’t know.  I haven’t decided yet.  Unless something drastic has happened, Mr. Pemberton is paying the bill which means he’s the one I take orders from.”

I picked up my bucket and walked upstairs.  I didn’t look back at her as I went.  I didn’t need to.  I knew she now disliked me as much as I disliked her.  I started to work.  Twenty minutes later, I could hear Diane leaving.  Mr. Pemberton walked up to me shortly thereafter.

He was smiling. “I am sorry about that.  Mrs. Spencer is supposedly the best realtor in Boston but she seems to lack some of the more elementary social graces.”

“Well, I’m sorry if I was too zesty.  The thought of all this wall paper removal has me in a crusty mood.”

“You’re too young to be crusty!”

“Wallpaper removal ages you prematurely.  Scientists haven’t proven it yet but I have.  I’m only 13 years old.”

He laughed and held his hands up near his face with his palms facing towards me. “Ah!  Don’t tell me that!  I want to be able to claim ignorance when I get arrested for violating child labor laws!”

You can really learn a lot about someone when they laugh.  The beauty of laughter is that your guard is supposed to be down and you surrender control.  It should be an unveiled glance into a person in their raw form.  Some people try to mask this and choose not to relinquish control while they laugh.  When I saw Mr. Pemberton laugh, I could see him as a young man.  This is the great thing about laughter with no restraint as you get older, you become as you were many years ago.  Mr. Pemberton took this to another level.  I could see him as a younger man almost all of the time.  He somehow avoided all the artificial restraints we put on ourselves as we age that hide what we are or what we once were.

I remember reading some old book of wisdom that was either Chinese or Japanese in origin.  One thing from it that stuck with me was that it compared a person to a white robe.  When a white robe is new, it is pure and free from blemish but as time goes by, it becomes stained, dirty, and tattered.  The book claimed this was the way for every robe, every person.  For his age, Mr. Pemberton was the whitest robe I’d ever seen.  A brand new white robe does not impress me.  A robe that has been through a long human life of any sort that still appears close to its original glory is something that deeply impresses me.

A wonderful line from “Red” portrayed by Morgan Freeman in The Shawshank Redemption comes to mind.  To escape from Shawshank Prison, Andy Dufresne is forced to make his way through a 500-yard-long sewage pipe which prompts Red to say, “Andy Dufresne – who crawled through a river of shit and came out clean on the other side.”  Life is often like this sewage pipe but no one seems to make it through clean except Andy Dufresne and Thomas Aloysius Pemberton.

“Don’t worry about the feisty Mrs. Spencer.  I’ll put this house on the market when I am ready to,” he assured me.

“Any thoughts as to where you’ll go after you sell this place?” I asked him.

“Well if I’m not dead, I guess I’ll move south but not Florida like everyone else my age.  I’m thinking something like Charleston or Asheville, maybe.  If I am dead, then my hope is to make it to Heaven which I hear is the best retirement community that money can’t buy.”

“Something tells me you won’t be dead.  Asheville?  Where is that?  In the Carolina’s somewhere?”

“What made you consider Asheville?”

“I’ve been through there a few times and it always seemed like a charming place, big enough where there’s interesting things to do but small enough to be relaxed.  And it’s earned some impressive superlatives recently from a bunch of magazines.” He laughed and continued, “AARP Magazine said it was one of the ‘Best Places to Reinvent Your Life’.” He laughed a little harder, “Rolling Stone said it’s the ‘New Freak Capital of the U.S.!’” Now he could hardly talk, “And Self Magazine rated it ‘The Happiest City for Women’ and God knows I love being around happy women!”

“Wonderful!  So you can be a reinvented freak that’s chasing after happy women!  Damn, I may be moving with you.”

I labored on with the wallpaper removal, spraying on stripper and scraping it off, cursing the slimy mess I became part of.  It didn’t help that I am a very neat person that enjoys organization.  Purposely making a mess that sticks to me goes against my very nature.  It was a struggle to not look at how much more I had to do as I went.  I tried but always failed to not constantly observe my slow pace and calculate how much time remained.

A few hours later I went downstairs to eat my lunch.  It was sunny and in the high 40’s which was warm enough for me to take my lunch outside.  I sat on the front steps that faced south and into a welcoming sun.  Mr. Pemberton came out with a cup of tea for me.  He left the front door open so we could hear the jazz he just put on. It Never Entered My Mind by Miles Davis was playing.

“It Never Entered My Mind by Miles Davis.  This is a song that deserves to be called pretty.  Miles recorded it in ’56 but the song is originally from a musical called ‘Higher and Higher’.  This is my favorite Miles Davis recording.  I remember hearing this song for the first time as I drove into Boston for the first time.  I only meant to visit here but my visit has lasted almost 50 years.”

“Where are you from originally?” I asked.

“What made you come to Boston?”

“After Interstate 70 eminently marched through my family’s farm, my parent’s decided to sell the land off in chunks.  They actually made a decent profit doing it that way.  Although we hated it at the time, they put an exit right next to our farm which created an artificial modern little hub of commercial activity.  We weren’t that far from Topeka to begin with but now with the new highway, the time was cut in half which made our area even more desirable.  Over time, hotels, gas stations, car dealerships and housing developers were willing to pay decent money for land in that area.  So my parents sold off the cows and farming equipment and patiently, slowly sold off the land over the next 10 years.  When they were done, they took their new found wealth to Florida and retired in ample comfort.  I decided to leave right when they made the decision to start selling the land and the cows.  The life I knew there was dying and I couldn’t stand to be an audience to its slow, agonizing demise.  I called up a friend from the war that lived in Boston and he invited me to stay with him for a while so I packed a few things into an old pickup truck and headed this way.  I drove back roads as much as possible.  I didn’t want to use or benefit from the very thing that had ruined my family’s way of life.  But as it turned out, this very thing brought my parents more money than if they had kept farming.  A fine example of making sweet delicious lemonade out of some sour highway lemons.”