Diane Spencer, or Diane “Spinster” as I called her (she was actually married but until I met the poor bastard hitched to this imp, I would not believe it) was upset with my lack of progress.  Her distaste reached the level that she approached me about it in person.  Without knocking or announcing her presence, she walked in the front door one day.  Mr. Pemberton was out for a walk and I was up on a step ladder, calmly painting some crown molding.  I was in a relatively peaceful, blissful state due to the fact that all the prep was done on this job.  Although I was not painting every room, the work ended up being much more than any of us originally thought.  But such is the way with big ancient ladies like “The Castle”.  They never fully reveal all the time and effort required to restore their greatness until you’re in too deep.  You have to treat such jobs like the Cold War.  You have to be tough but cool.  Patience and nerves of adamantium must be summoned upon to slowly defeat your enemy.  Yes, adamantium is the metal alloy found in the comic book character Wolverine’s body.  So I’m saying that your nerves must be as strong as a substance that doesn’t even exist.  I realize that’s asking a lot but that’s what it takes.

Her high heels resonated through the large chamber- like rooms as she walked.  I was in some room downstairs.  I don’t know which room it was because when a house is this big, you run out of names for rooms.  After “kitchen”, “dining room”, “living room”, “foyer”, “den”, and “family room”, I don’t know how to label a first floor room.  Perhaps it was some kind of parlor.  However it was called, Diane somehow managed to let her anger enter this room before her body.  By the time I saw her, I was preparing myself for a stupid battle.  She was wearing the same exact suit when I met her except this one was charcoal gray.  Her real tan was gone and was now replaced with a moderate but fake one, given away by the subtle orange hues in her skin.  Her hair was about an inch shorter and she arrived in a brand new Range Rover!  Damn, this lady moved fast.  There was no mistaking that new car glow, even through the old window that I looked to witness it.  I imagined she got a new car with the same frequency she had her hair done.  In her style, Diane skipped over any greeting and launched into her message.

“When do you plan to finish up?”

Partly out of truth but more out of trying to get under her skin, I replied as vaguely as possible.  “I’m not sure exactly, one…maybe two weeks.  It depends on how the windows go.  They suck up a lot of time.”

“You know, I told Mr. Pemberton not to use you.  I knew you were going to take too long.  I have a crew I work with that would have been done two weeks ago.”

I was amazed how cold she was.  God, I pray that she did not breed.  What a horrific sentence it would be to serve as a son or daughter under this foul by-product of humanity.

“Well I hope they charge you a lot because it must be an awful experience to work with you.”

“I am trying to sell this house!  You are getting in the way of me servicing my client.”

“You really mean I’m getting in the way of your commission.”  Her eyes opened painfully wide and I could see her anger taking hold.  I was a little disappointed with myself for throwing that mud so I now tried to use logic and truth to defeat her.  “Look, I’m sorry it’s taken as long as it has.  I work alone; that’s simply how I do it.  I’ve been very up front with Mr. Pemberton.  After a week of working here, I told him this was going to take longer than we hoped.  I told him that it would delay the date that the house was put on the market.  I told him that although I don’t work with other people, I will try to find help to speed things along if that’s what he wanted but he said ‘No, you don’t have to do that.’”

“Well no one asked me!  This house needs to be on the market yesterday if we want to have a chance of selling it!  It has to be listed before the end of spring!  Don’t you get that?!”

“You’re not listening!  The customer said he was okay with not only my work but the pace in which I’m doing it.  So after that, I don’t give a crap what the realtor or the potential buyer or the mailman think!“

“You are the most unprofessional contractor I’ve ever had to work with!  I will make sure you never work on any project I am associated with!  If I had any idea from the start…”

In the middle of her vitriol that was more intended to make her feel powerful than to provide me with beneficial criticism, Mr. Pemberton walked in the back door from his walk.  I was amazed that she kept going.  He spoke in a loud but controlled voice.

“Mrs. Spencer, can you please join me in the kitchen?”

She stopped talking.  She knew what was coming.  Her eyelids half closed, her head shook slightly, and with her mouth just barely ajar, I could see her tongue retreat to the back of her mouth.  Diane spun around and walked into the kitchen.  Out of class and grace, Mr. Pemberton kept his voice low but I could still barely make out his words.

“Mrs. Spencer, when you had an issue with the timing of Chris’ work, you should have expressed your concerns to me first.  Now, you may notice that as I spoke, I used the past tense.  That is because it is proper to use the past tense when speaking of an event and, in this case, a person that only exists in your past.  You will no longer be in my future, Mrs. Spencer and in the time it takes you to walk to the front door, you will no longer be in my present.  Have a good day.”

And with that, Diane Spencer was off the case.  Thank God I remembered everything Mr. Pemberton said to her.  I had never heard a more eloquent reprimand in my life.  I wondered if Mr. Pemberton’s hands were in his pockets as he spoke to Diane.  I bet they were.

As she walked by me, I pointed out an important fact to her. “Well Diane, it looks like you went from Diane Spencer ‘For Hire’ to Diane Spencer ‘You’re Fired’.”  Whether or not she got my famous 1980’s television reference, I’m not sure but I am sure that she understood that my statement came from the heart. 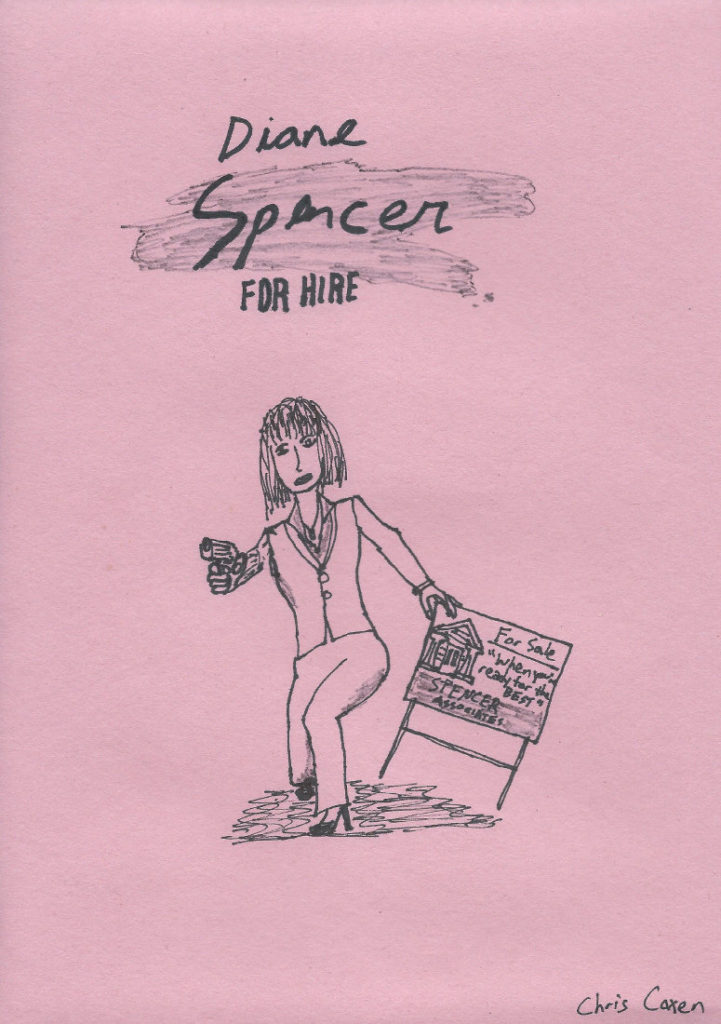 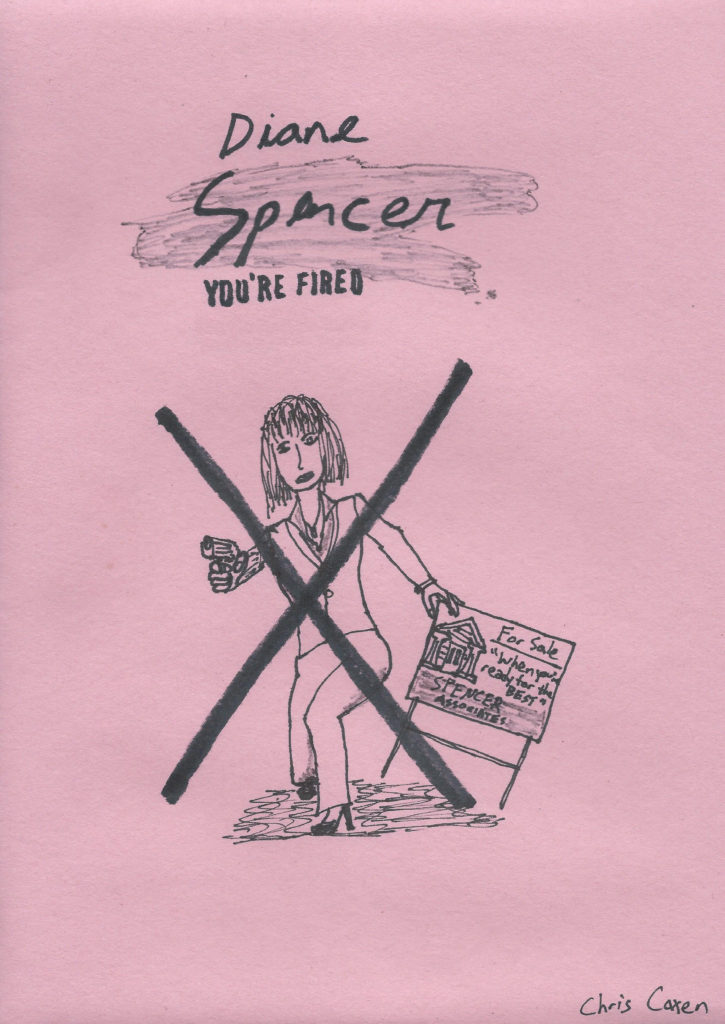 Mr. Pemberton walked in.  His expression was neutral.  His body language gave little to go on.

“You know I really loved Spenser For Hire.”

We both laughed.  We were clearly two people that did not like tension and looked to break it.

“Yeah, I probably shouldn’t have said that to her but if you heard our full conversation, you may have condoned it.”

“I condone it with the little I heard.”  He then became serious.  “I am sorry you had to deal with her.  I hired Mrs. Spencer so I must take responsibility for her.  Friends of mine recommended her and I was willing to put up with some of her nonsense because I know that is in the nature of many successful sales types.  But her attack on you today was inexcusable.  To put it simply, Chris, you’re a good person and good people should be defended. ”

He nodded.  “Now let’s get some jazz going.”