Barry walked into the kitchen at The Castle.  It was a little after six in the morning.  Terrence had just woken up and was eating oatmeal (or porridge as he would call it).  He was so startled by Barry’s appearance that some porridge oatmeal went down the wrong tube and he began to cough violently.   Terrence’s face had become red so fast that one might think he was a less important mutant in the X-Men universe, a mutant that only had the power to turn red very quickly and therefore was never involved in many important mutant adventures.

Terrence nodded while coughing which caused his nodding to stray from the usual, rhythmic pattern that nodding tends to follow.

“Now you see why I avoid that unsavory paste you’re eating.  Chardonnay never does this to me.  Oatmeal can kill you!  It’s riskier to your health than smoking or skinny dipping in the ocean during a lightning storm…don’t ask me how I know.  Whoa.”

The coughing lingered to the point that the lack of bodily control was starting to frustrate Terrence.  Barry held out a black VHS cassette to Terrence.  “Maybe this will ease your porridge attack.”

With great concentration, Terrence managed to speak.  Knowing a cough was right around the corner, he spoke rapidly, “Thank you Barry.”

“With pleasure, Mr. Porridge Toes.  Well, my figure needs to marinate in a sleep sauce for at least six hours so I will enjoy your presence in the PM.”

Barry may have been up for over 20 hours straight but he still had it in him to scat while heading up the stairs.  Terrence finally stopped coughing and studied the cassette so intently that he accidentally let one corner of the tape dip slightly into his porridge.  When he took notice of this, he scowled and quickly cleaned it off.  Terrence was furious with his porridge. 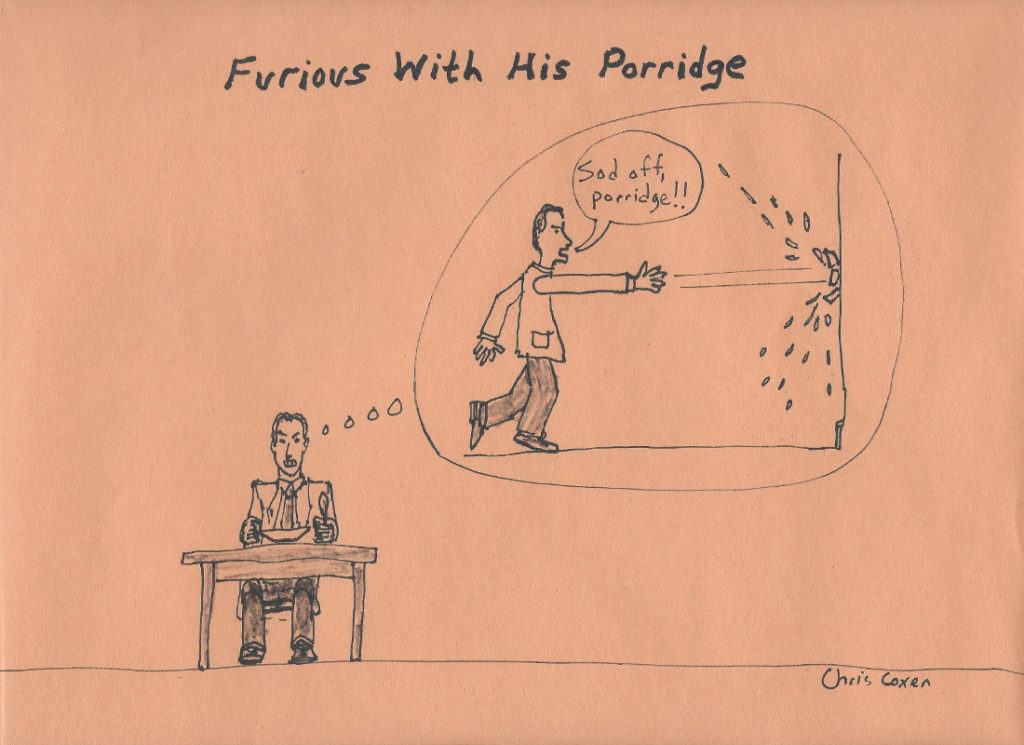 I entered the dining room which is strange to still refer to it as a dining room.  There is a dining room table in the room but it’s often used as a conference table.  On the other side of the room is a large computer called “The Geek”.  I’m not sure any room in our time can boast of such a compelling combination.

Terrence had already been watching the tape.  He noticed me and then brought his eyes back to the screen as he spoke.  His voice was still a tad raspy from the porridge attack. “I’ve been studying the tape Barry recovered.  You were right – someone positioned the security cameras in a way that you couldn’t see anything.  But look, after Ripps adjusted the cameras, have a look…”

Had this been a sketch comedy video on Funny or Die, it would have made perfect sense.  It would have even fared better than Will Ferrell’s finest work.  Terrence edited the footage so it I could enjoy what was a destructive highlight reel.  Each clip started innocently.  There would be an old woman rolling by in a wheelchair or an old man inching along with a cane and then something happened that at first, I did not see coming.  They would look around and if no one was around, their bodies suddenly went 50 years back in time.

These were young people in very convincing elderly disguises that, once the coast was clear, began vandalizing the property in a variety of ways.  The hunched over old man with a cane crept up to a vending machine, sprung up and smashed the front glass with bottom of his cane with amazing force and then sunk back to his ancient posture and crept away.  The old lady (her disguise actually made her only look to be about 60) moved diagonally across the gym floor in a wheel chair.  But she didn’t push her wheel chair along with her hands in the usual fashion.  She shimmied along with her feet.

The only other person I saw use a wheelchair this way was a man in his 30’s that would shuffle along with his feet through my neighborhood in West Roxbury.  This style would often make you wonder if the person really needed a wheelchair.  A divorced and unmistakably hot woman in her 40’s that I knew, Lucy, saw him shuffling along in his chair one day.  He stopped and asked Lucy to push him up a hill.  She did it but then scolded him for using a wheel chair when he didn’t need one (or so she thought).  I remember her telling me this story and wondering if her talk had any effect on the man.  But then a week a later I saw him doing the wheel chair shuffle again so I guess her tough love and hotness did not motivate him to walk.

The lady in the video stopped her wheelchair about mid-court, grabbed a bag that was hanging off the back of her chair, pulled out what looked to be rocks, rotten fruit and other unsavory projectiles (I’m nearly certain she had a few bags of mammalian waste) and began throwing them in all directions, managing to break a couple windows in the process.  Once satisfied, she sat back down in her chair and rolled on.

Part of me desperately wanted to be entertained by all of this.  The disguises, the commitment to their roles, it was all brilliantly theatric and executed in a manner that made most professional actors look uninspired.

Terrence fast forwarded and accidentally let out a rare giggle, “This chap wasn’t as skilled.”

A young man with long dark brown hair was wearing a gray wig that covered less than half of his hair.  The rest of his outfit appeared to be his normal wardrobe.  Thankfully, his vandalizing was as bad as his costume construction.  He picked up a nearby large, hollow plastic bat and began striking a concrete wall with little effect. 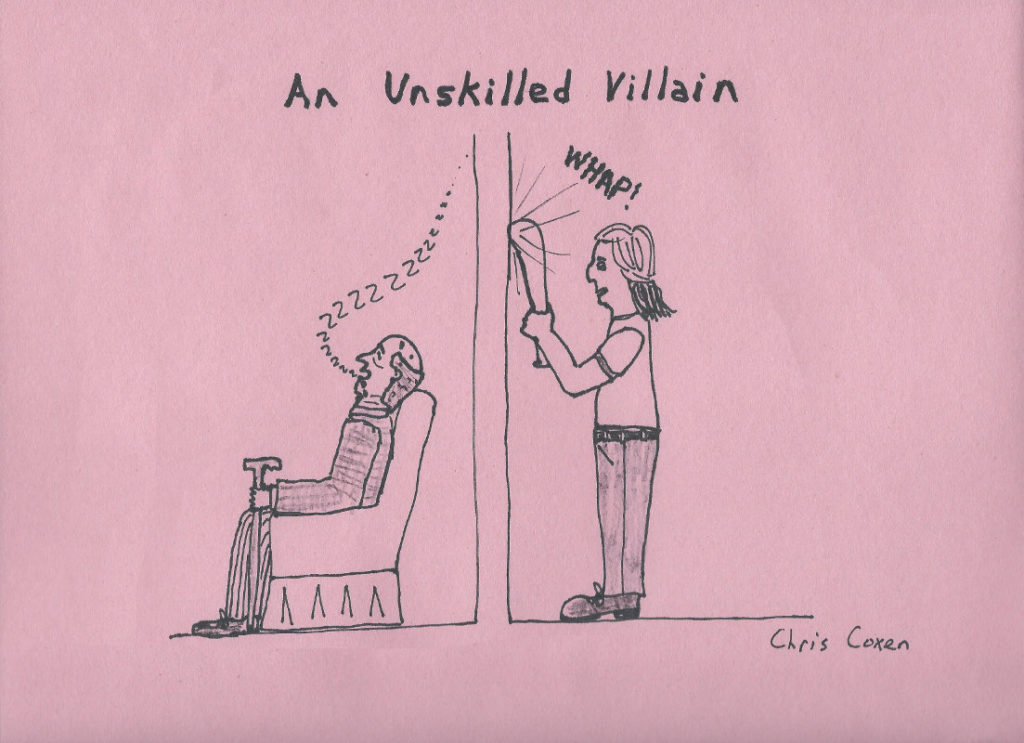 Terrence’s tone turned serious again, “Even the handyman was in on it.”

I couldn’t believe it.  This turkey was in the kitchen semi-disassembling the cabinets and a few appliances.  He even kicked a few holes in a plaster wall.

“Do you notice anything interesting about his tools?” I asked.

“Yes,” Terrence answered. “They look brand new and he’s got loads of them.”

“Right…and they’re all Jopman tools which is one of the highest quality toolmakers in the US.  They also make a lot of various industrial equipment.  Do me a favor and see if The Geek can find any interesting data on Jopman.  I think we’re going to need more than your average Google search on this.  Perhaps The Geek can track his or her way into some more sensitive data.  As much as I would love to send Barry out to sleep with all the female VP’s of Jopman, I just don’t think we have the time.”

Terrence smiled a little bit.  He couldn’t help but be impressed by Barry’s work but he now had the chance to let The Geek prove itself.  “Will do!  Oh…there’s something else.  This may be difficult to watch but I have discovered the fate of Linda…”

The tape showed Ripps placing Linda against the wall in a hallway outside of a bathroom and then entering the bathroom.  A moment after, Carl, the slug of a handyman oozed out into the hallway from a door on the opposite side of the hallway, picked up Linda, studied her and walked back into the room he came from.  Shortly after, Carl came out of the room again with several objects curled up in his left arm and walked down the hallway and out of the camera’s view.  I missed it at first so Terrence rewound the tape, paused it and zoomed.  I could now see it.  He was clearly holding pieces of Linda.  She had been cut into many pieces that were all the same dimension.  Terrence zoomed in closer to one piece in particular.  It had the word “Linda” written on it.

I heard screaming from outside.  It sounded like it was behind us.  Terrence and I turned around and there was Ripps outside of one of the windows looking at the screen.  He had clearly watched the whole thing.  I should have been more careful.  I knew that Ripps like to do his outdoor rock workout or “Stone Social” as he called it.  He was taking a breather between sets when he walked by the window and saw the footage.

Ripps’ face was a window several years into the past.  His face looked like it must have looked when his father destroyed his favorite toys years ago.  Ripps’ façade was gone, leaving a very real expression in its absence on his face.  We may think it’s silly to become so upset about the destruction of a piece of wood but this seemingly boring inanimate object had fused itself with his psyche, making it a thing that represented a part of him he desperately wished to restore but could not.  This object created hope and kept him in balance and until he learned to quell the initial trauma that created the need for it, he would become terribly out of balance.  In many ways, this fascinating attachment to an inanimate object resembled Tom Hank’s character’s bond with “Wilson” the volleyball in Cast Away.

I made eye contact with Ripps for about one second.  He then ran off.