The day started with Ripps changing the street signs on our street from Forest Hills Street to America Street.  He said he always wanted to live on a street named “America” but got tired of waiting for the opportunity to present itself.  Instead, he would create this opportunity.  Stever liked that and although the behavior was illegal, he would use this act as an example of how we can control our environment instead of our environment controlling us.  A concerned citizen walked by Ripps as he exchanged one of the signs and tried to protest his actions but he simply flexed his arms and said “Geek!” and they moved on.  Ripps even went as far as to call the Post Office and inform them that our address had changed.

“Have you moved?” the postal employee inquired.

“Oh, well…that’s odd.  I see no record of a street name change on your street. Hmmm…”

“Well I guess I’ll just go ahead and make this change.”

And just like that, we now all lived at 95 America Street. 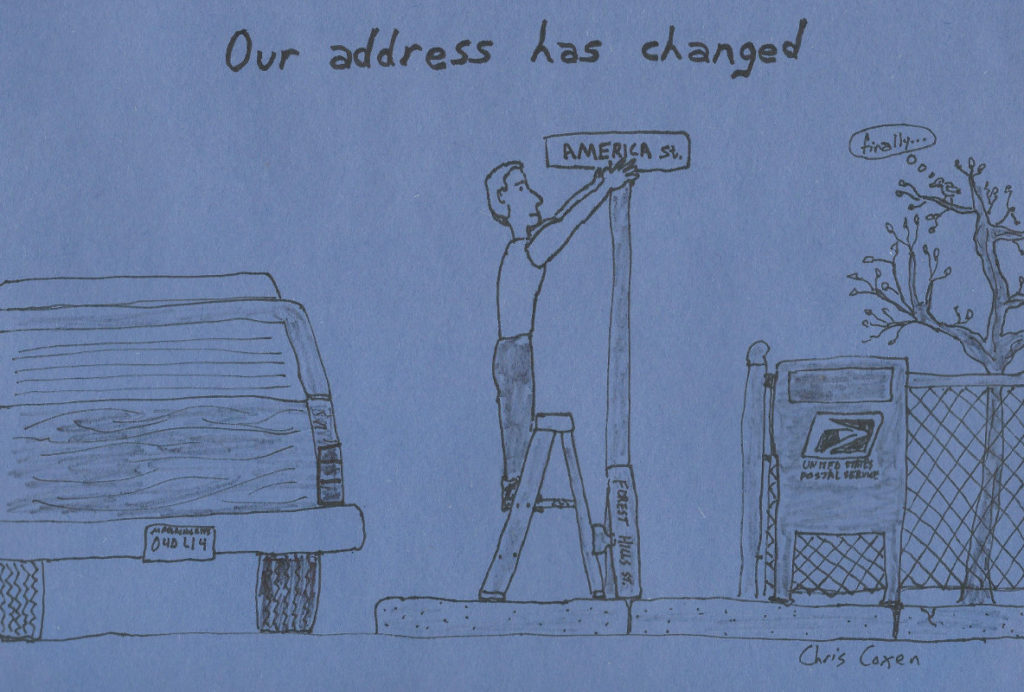 Arguably the greatest result of our helping the community center was that the kids got to perform their play.  Barry, Danny, Ripps, Stever, Terrence and I all attended.  Of course Barry was with lady.  I think her name was Adriana but I’m not sure.  All I know is that she had what Barry would refer to as a “top-shelf figure” and had recently arrived from South America.  She somehow found herself being shown the highlights of Boston by a more than capable guide, free of charge.  In a quiet voice, Barry spoke to her in near perfect Spanish.  I didn’t catch it all but I could tell he was explaining the origins of his suit.  Barry’s use of “Bangkok” and “Thailand” elicited a “¡Dios mío!” from his gorgeous companion.  Barry…he had all of these ladies all over him but he still managed to keep things classy.

As we sat in the back, I looked around the gym.  Only two days ago, a very deadly play was performed in the very same spot.  Where there was near-death and violence, now there was innocence and joy.  It always struck me how quickly a physical place can change.  Certain places seem to maintain the old horrific ghosts of past events, leaving its confines forever tainted.  Other places seem immune to good or evil and are simply defined by the current moment.  So perhaps this place with its “in the moment” nature could be called Bhuddist.  Whatever it is called, none of the smiling faces sitting in the audience would have believed such rough doings transpired here 48 hours ago.

I had been so distracted that I had not bothered to find out what this play was about.  We arrived late so none of us had time to look at the playbill.  This is just as well for it was a sensational surprise to discover this play as it happened.  Once I knew what it was, I began to laugh so hard that much of the audience turned around and stared at me.  They were doing some Shakespearean treatment of the Transformers!  I could not believe this.  Someone connected with the center was a massive Transformers (and Shakespeare apparently) fan and wrote this unexpected gem.  Here I was, preparing to fence with boredom for 45 minutes and instead got something that caused my focus to be aroused.

A child dressed in an outfit consisting of cardboard and clothing, resembling Optimus Prime spoke, “Megatron, oh, Megatron!  Thou shall not take thy energon cubes on thee Space Bridge back to our beloved Cybertron!”

A child on the other side of the stage, also in a cardboard/clothing outfit replied, “Thou art a fool, Optimus Prime!  Thou shall taste thee pain from my laser cannon!  Decepticons…attack!!”

Children with cardboard wings flooded on to the stage from the right and children on small tricycles and little cars come out from stage left.  They acted out a battle with each other while laser noises were heard over the sound system.  At certain points, transforming noises recorded from the show, like the laser noises, were played as the children got out of the cars or off their tricycles or made changes to their flying outfits and became more robotic in their appearance.  Ripps and Danny seemed to absorb more meaning and emotion from this pretend battle for obvious reasons. 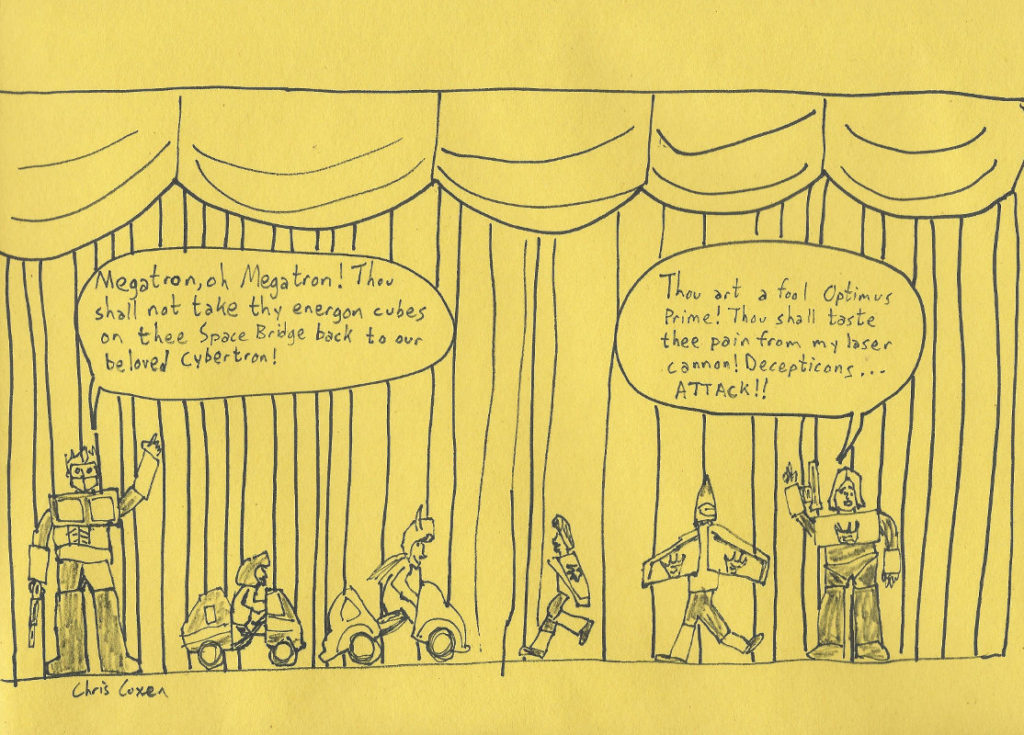 The play ended and all the children bowed in front of a genuinely enthusiastic audience.  Most of the audience was comprised of parents and relatives that knew what had been happening the past few weeks.  This night was like some kind of overwhelming release.  A great fear had passed and although they didn’t quite know the exact role we played or how it all went down, they seemed to be applauding not just their children but the unknown heroes that restored peace and happiness to their center.  Amanda Pimmsley approached the microphone.  Although we instructed her to not mention our involvement, she acknowledged us in a very indirect but tasteful manner.

“Thank you for watching our play tonight.  The children worked very hard on this.  A big thank you to Jason Bishop for writing a very unique play, to Shelley Adamson and her gang for handling all the tech, to Maria Gutierrez for organizing the ticketing and refreshments and to all those special, unnamed angels that watched over us and saved our center in what felt like the final hours.  As you all know, we’re now going to have our ‘adult’ party so please stick around and enjoy yourselves.  And to entertain us, I introduce to you, Bermuda’s own…BARRY TATTLE!”

I had no idea this was going to take place!  This night was becoming legend.  The curtain parted and there stood Barry in his signature burgundy silk.  Behind him was Franny, the fine gent that ran the open jazz jam at the Milky Way, and his band.  Before the clapping died down, they launched right into a jazzy version of the Transformers theme song.  Listening to Barry’s jazzy handling of the science fiction cartoon lyrics was like being born all over again but this time, born with the full mental capacities of an adult.  I had not had anything to drink yet but I already felt quite heady.